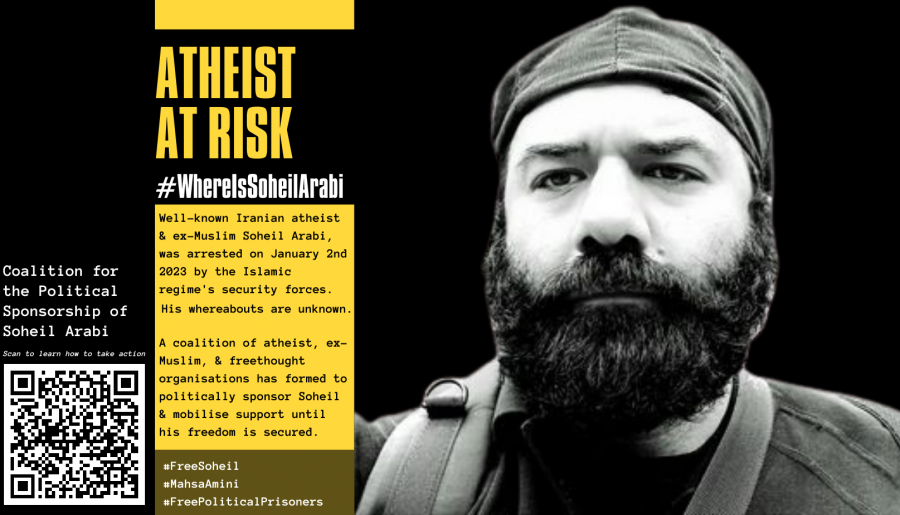 We, the undersigned freethought, ex-Muslim, atheist, and secularist organisations, have joined together to politically sponsor the well-known Iranian atheist and ex-Muslim Soheil Arabi, who was re-arrested from his home on 2 January 2023 by the Islamic Republic of Iran’s security forces.

Sources have informed us that he was violently beaten during the arrest, denied much-needed medicine and moved to an unknown location.

We are extremely concerned about his well-being given the increased risk of execution for many protestors and critics in an effort to quell the revolutionary uprising since the murder of Mahsa Jina Amini. As a long-term political prisoner previously on death row, Soheil’s life is at grave risk.

A political sponsorship system has proven effective in protecting Iranian political prisoners. As Soheil Arabi’s political sponsors, we will continue to advocate and mobilise support and solidarity for him and put pressure on the Islamic regime of Iran to free him immediately and unconditionally.

For more information contact Maryam Namazie, Council of Ex-Muslims of Britain at m.namazie@ex-muslim.org.uk and Susanna McIntyre, Atheist Republic at susanna@atheistrepublic.com.