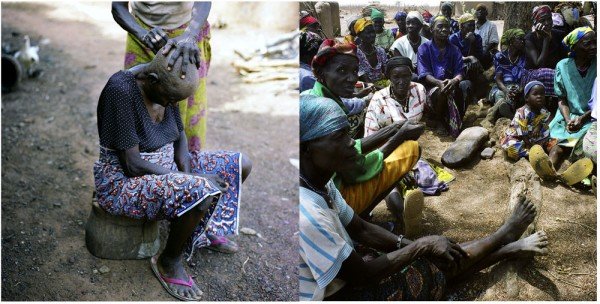 The religious centeredness of most African states has paved way for the justification of inhumane acts committed against minority groups. One of the growing concerns is the growth of witches’ camps across the northern part of Ghana. These can be found in popular villages like Gambaga, Bonyase, Gushegu, Kukuo and many other towns in the region.

The wides pread of these camps are a result of the lack of modern methods for solving problems and relying on religion for solutions instead. Women form the majority driven from their homes and community on the basis of witchcraft. Most news from the media reported that the condemnation of these women was the result of neighbors blaming them for their sickness, misfortunes and for seeing them in their dreams. Those accused are sent to a priest who performs unhealthy rituals to neutralize their ‘powers’. They are forced to drink concoctions and subjected to bizarre rituals. At the shrine, there are no scientific or reasonable tests undertaken to prove them guilty.

These women are often accused of witchcraft by people who owe them money. Some find themselves in this situation because someone close to them died unexpectedly. In an interview with women at the Gambaga witch camp by ‘unsilenced voices’, one victim shared her story on how she ended up in the witches camp. According to her, she had a disturbing dream which she reported to her husband. They consulted a fetish priest in the town to seek the meaning of her dream. The priest accused her of being a witch. This resulted in severe physical abuse that chased her out of her community.

Most of these camps are dilapidated mud huts posing great dangers to the lives of these women. A majority of the accused are aged and cannot commit their strength to any activity so as to feed themselves. They live under precarious conditions with no food and no source of livelihood. In the worst situations, most of them are lynched to death, burnt with hot metals and chased out of their communities.

Groups of concerned citizens have made appeals to the government and other bodies in the Ghanaian community yet these pleas are met with no befitting response. People continue to suffer by the spread of religious dogmas and religious practices within the African diaspora. The rights and freedoms of individuals are being curtailed under religious extremism. It has become necessary to bring an abrupt end to these practices and restore dignity to the lives of these women.