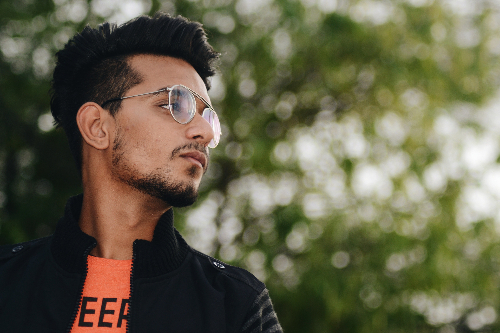 “I get constant threats from the jihadis on the phone/social media. I’m hiding from them all these years. What if they get to know my location because those people whom we used to trust are even against us now. I’m sick of dealing with them already. I can’t take all these stresses anymore. It has been ongoing for five years now. I am living without freedom and peace and I need to leave this place as soon as possible.”

November 2022 – “For the past few years, my life in Bangladesh has turned into a nightmare. Jihadis were stalking me everywhere. I was running from one place to another, death threats, sleepless nights. Finally, I left Bangladesh for India to save my life. I had no other choice in front of me than to leave. SUN helped me with some funding, after which I could apply for a visa to India. Unfortunately, I could get only a tourist visa which is valid for 90 days in a single entry.

I decided to leave for India. My intentions were to stay in India with my brother for a while, then come to Bangladesh for a week and then re-enter India again. I reached India in the month of June. The days following that were the most peaceful I had felt for so long. On the 87th day of my stay in India, 1st September 2022, I began my journey to come to Bangladesh for a short time, in accordance with the visa rules. I thought if I respect the law, the law would respect me.

When I reached the India-Bangladesh land border, an Indian immigration officer detained me and asked me a lot of questions. I cooperated with them and they kept interrogating me? I was respecting the law by leaving the country in 87 days. An FRRO officer did let me go threatening me that he would restrict my entry for a year. While leaving the immigration desk they detained me again, took me to a separate room and seized my phone and belongings. I said I went to India for travelling but they weren’t ready to buy it They kept questioning me as if I was a criminal. They checked if I booked any hotels under my name in India but couldn’t find any records since I stayed with my brother in his apartment. I couldn’t tell them this because he’s illegal. I didn’t want him to be in trouble because of me. At last, after 4 hours I gave them his old address, then they released me to go but took almost all my 6,000 rupees in cash.
When I reached the Bangladeshi border, I found out that my bus had already left.

I was so tired and frightened I couldn’t think straight about where to go. I had to take several local buses. By the next day afternoon I reached Chittagong. This is not where I intended to go. At that moment I felt like if I had to die l would die. I knew if the Islamic militants spot me in Chittagong they wouldn’t think twice to sacrifice me for Allah.

I survived hiding out near Cox’s Bazar. I haven’t slept a night peacefully without having a nightmare ever since. I remember before coming to Bangladesh I was telling Maarten maybe I recovered from my past trauma. In reality, it’s back again. I’m planning to go back to India. I’m not sure if they’d let me in without any harassment. I want to live like a normal person. I want to sleep and enjoy my life with my friends and family. But it has become like a dream to me now.”

Shadhin is under threat from jihadis in Bangladesh

April 2022 – Shadhin from Chittagong, Bangladesh grew up in a Muslim family along with his two brother. They had a regular Muslim upbringing earlier in their lives. In the 9th grade, Shadhin was introduced to the late writer Humayun Azad. Shadhin was really fascinated by his bold writing and started reading his books. Azad’s influence made Shadhin an atheist and in his 10th grade, he decided to change his name to Shadhin. Due to this, he had to face many problems from the education board to family members, finally forcing him to drop out of school.

Shadhin is a secular atheist who supports LGBTQ+. He has a blog called ‘Bangladeshi Atheists’. Both Shadhin and his brother Fahad, who is also an atheist, actively participate in discussion groups and forums related to atheism. Their discussions revolve around atheism and achieving world peace without any religions. In fact, they even influenced their mother to become an atheist that she stopped wearing the hijab, and burka, and stopped practicing Muslim religious traditions.

On 1st October 2017 local jihadis attacked Fahad for writing and sharing anti-religious content. Those jihadis’ sole purpose was to kill Fahad that day and stabbed him severely with a sharp knife leaving him to die. Luckily, he survived. The jihadis wanted to attack Shadhin also but couldn’t find Shadhin that day. Since then, the threats from jihadis toward Shadhin and his family have increased. Fahad filed a police complaint against the attackers but no arrests were made as the jihadis have powerful connections.

Eventually, Fahad had to leave Bangladesh for India for safety and better treatment. Shadhin stayed back to support his mother and younger brother. But the jihadis were still looking out for Shadhin to kill him. To make matters worse, right after the attack on Fahad, their father abandoned them because he was unable to accept the idea of atheism. Raising a family as a single mother who is an atheist is a very challenging task in an Islamic country like Bangladesh. Yet, they somehow found the strength to survive. Shadhin chose to live in the town and village by switching every week for his safety. He was living with his mother’s family in the village.

But things took a turn for the worse last week when his mother asked for her share of the property from her maternal grandmother. They had a huge argument and Shadhin’s maternal aunts and uncle were denying to give his mother her share of the property saying that they are an apostate family. His aunt’s husband, a mullah, threatened Shadhin about reporting to the police or to the jihadi leaders if his mom or Shadhin seek shelter there again. Shadhin is not safe in the town as well. They have a pet dog at home which is considered haram in Islam.

Shadhin says, “I get constant threats from the jihadis on the phone/social media. I’m hiding from them all these years. What if they get to know my location because those people whom we used to trust are even against us now. I’m sick of dealing with them already. I can’t take all these stresses anymore. It has been ongoing for five years now. I am living without freedom and peace and I need to leave this place as soon as possible.”

Shadhin wants to leave Bangladesh as soon as possible. He is planning to move to India. But he needs money for a visa and travel. Any delay in getting help to Shadhin can make a difference in life and death. Please help Shadhin in this situation.