Born to a teaching father and domestic worker mum. The young Tutu had plans to become a doctor, partly thanks to a boyhood bout of tuberculosis. However, given the scarcity of cash, he fell on teaching.

“The government was giving scholarships for people who wanted to become teachers,” he told the Academy of Achievement. “I became a teacher and I haven’t regretted that.”

However, disillusioned with the passage of the Bantu Education Act in 1953 that racially segregated the nation’s education system, he resigned in protest.

Not long after, the Bishop of Johannesburg agreed to accept him for the priesthood — Tutu believed it was because he was a Black man with a university education, a rarity in the 1950s — and took up his new vocation.

With the apartheid authority’s brutal oppression in full force, 69 people were killed in the Sharpeville Massacre in March 1960 as South African police opened fire on a crowd of protesters.

Mandela — then a firebrand leading an armed wing of the ANC — was arrested, tried, and in 1964, sentenced to life in prison. 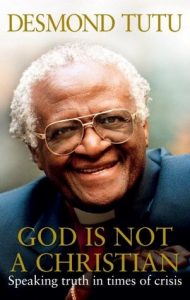 As Bishop of Lesotho, and aware of the growing discontent among the Black people, Tutu penned a May 1976 letter to the prime minister, warning of unrest. A month later Soweto exploded in violence with more than 600 people dying in the uprising.

He was arrested while taking an anti-apartheid petition to South Africa’s parliament.

He also led a 20,000-person march in Cape Town. Appointed to Truth and Reconciliation Commission to address the human rights violations of the apartheid years in 1995 by Mandela, The TRC gave its report to the government in 1998.

Controversies nonetheless followed the diminutive figure. Unlike the Nuremberg trials where Nazi operatives were jailed, Tutu and his 14 fellow commissioners gathered “not to judge the morality of people’s actions, but to act as an incubation chamber for national healing, reconciliation and forgiveness.”

Perpetrators of horrific violence, often foot soldiers of the repressive Apartheid regime, could come before the commission and receive amnesty for the actions they carried out.

It was a tough pill for many observers and victims to swallow, but only if one thought of justice “as retributive and punitive in nature”, wrote Tutu.

While many from the Black stock expected justice by way of jail terms for their oppressors, Desmond Tutu championed restorative justice which he said was concerned not so much with punishment as with correcting imbalances, restoring broken relationships — with healing, harmony and reconciliation.

Tutu feared S. Africa ‘couldn’t move on’ if trapped in cycle of punishment and retribution. And so victims of the brutality of their rigid, right-wing former government had to contend with looking on. 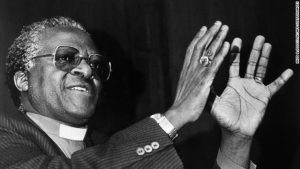 None of the perpetrators of human rights violations who had been denied amnesty for failing to fully disclose their actions— or failing to prove they were politically motivated— were ever prosecuted.

Nor were any of the generals and commanders who avoided the hearings altogether held accountable. And the government also did not implement the recommended one-off wealth tax to bridge the gap in a deeply unequal South Africa.

While Archbishop Desmond Tutu voiced his concerns about the Black Majority ANC government of Mandela, Mbeki and Zuma, his harsher criticism was during the Jacob Zuma presidency. Zuma’s presidency ended in 2018 amid allegations of systematic corruption and maladministration divided opinions.

Zuma loyalists still are bearing a grudge have distanced themselves from the outpouring of grief and tributes.

Tutu’s commitment and determination did not just anger supporters of the white officials constrained to disclose the depredations of the apartheid regime, but also unsettled Winnie Madikizela-Mandela supporters.

The council’s investigation of Winnie Madikizela-Mandela, Nelson Mandela’s former wife, for the abduction and eventual murder of a teenager still rankles. On social media on Sunday, some called Tutu a “stooge for white people.”

Desmond Tutu bashed Robert Mugabe for staying too long in power in Zimbabwe describing the Zimbabwean president as “a cartoon figure of an archetypical African dictator.”

Even in the Anglican Church, an institution to which he dedicated much of his life; Tutu’s liberal understanding of faith riled many. No one doubted his faith or commitment to the institution but not every cleric enjoyed hearing about a God who had a “soft spot for sinners” and fewer still on a continent riven by visceral homophobia appreciated his vocal, consistent support for LGBT rights.

“I would not worship a God who is homophobic and that is how deeply I feel about this,” he said in 2013. “I would refuse to go to a homophobic heaven. No, I would say, ‘Sorry, I would much rather go to the other place.’” He also supported the right to assisted death, another controversial position within the church. Other interventions argued for urgent action against climate change and a change in US policy on Israel.

Tutu is survived by his wife of more than 60 years, Nomalizo Leah Tutu, with whom he had four children, Trevor, Theresa, Naomi and Mpho.

Michael Eli Dokosi is a journalist and a formidable writer with a decade’s experience. He is a blogger as well who currently owns and manages the news portal www.blakkpepper.com.