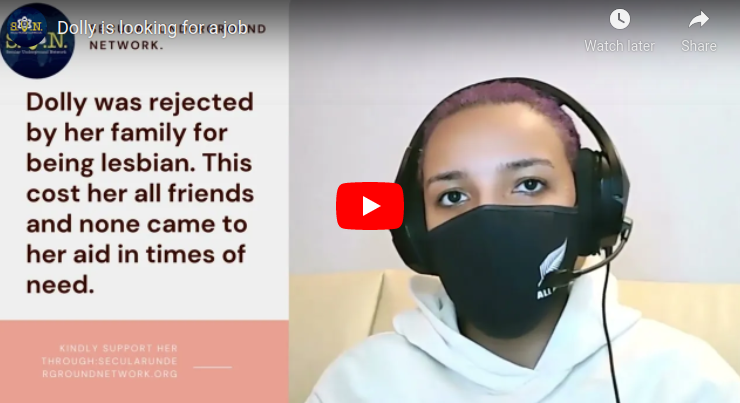 Dolly Sarkasmo (an alias for her own safety) is a lesbian Ex-Muslim from Egypt. She is an activist, working to secure a better future for LGBTQ people in the middle east. Recently she was able to flee to Georgia in eastern Europe where she awaits her asylum procedure. Now she needs our help to survive until she can get asylum and build up her new life.

November 2022 – Our optimistic female warrior known as Dolly is still powering through. Some of us are dealt a bad hand at birth and we can’t always change the cards, but we surely can work with the cards we’re dealt. That’s exactly what our heroine is doing, she’s using every card she has and that’s something to be admired.

At the moment she’s still waiting for her asylum request to be approved in Georgia. It’s been 12 months with no answer, it’s like being in a transit house, she says. She came from such a dark place and is now in this grey limbo hoping to get to the light.

I’m amazed by how she chooses to look at her current situation, because her circumstances seem so dire on its own and yet for her this limbo is her sanctuary.

Dear reader, I hope that I don’t have to convince you to donate what you can at this point. I’m just asking you to close your eyes and imagine. Imagine you’re a 26-year-old young woman, alone in a country you don’t know, with no family or close friends to act as your safety net if you were to fall, imagine having to decide between paying rent or buying food, imagine being abused in every possible way while waiting for life to open its arms to you.


Help Dolly to survive until she has a job
Monthly goal

October 2022 – Dolly, the 26 year old refugee from Egypt is still waiting to get asylum in Georgia after twelve months. In the meanwhile, she is trying her utmost to get a job to provide for herself. Dolly who fled her own country because she feared for her life, ran from prejudice and death threats is trying to keep afloat with every ounce of energy she can muster. She tries to sound cheerful on the phone, but I hear the cracks in her voice because of all the uncertainty that surrounds her still. She wiggled herself out of the arms of one evil just to be embraced by another. My heart aches for her when I hear that she sometimes eats only one cup of yogurt with biscuits for the whole day, my heart aches for her when she tells me about how she furnished an empty studio month by month, just to have the necessities, my heart aches for her when she says that she has to take the humiliation and survive because there’s no one to pick her up if she falls. Imagine this being your reality when you’re in the prime of your life.

She got fired from her previous job after being humiliated and talked down to, after the company requested that she should change just about everything about her looks, that she should wear dresses and make-up. Look more feminine they told her, she complied. She complied even though it was chipping away at her, at everything she fought for. She complied because she needed the job, the money, the promise of something better. She worked twelve hours a day, four days a week for $450. After a month and a half, they fired her because of a bad report from her manager, who insulted her in front of her colleagues, made distasteful jokes about women and talked to her like she was nothing.

But perhaps being fired was a blessing in disguise, now she follows a(unpaid)training as a quality assurance tester for three months. After she passes the final test, she can get to work. In the meanwhile, financial aid is more than welcome so that she can focus on her training and not worry about how to pay her bills. Every bit helps dear reader, so if you’re feeling generous after you read this, feel free to hop on over to Dolly’s crowdfunding page and donate whatever you feel comfortable with.

Episode – 1: Life in Georgia is not easy for a lesbian ex-muslim

May 2022 – One of the first things she did after leaving Egypt is to pick up her role as an activist by reviving the Arab channel of Atheist Republic. Besides that she is fighting for herself to survive. Dolly had a few jobs, but was fired when they found out she is a lesbian. Without a job or financial support, she will not be able to await the asylum procedure and start a new life. She might even be forced to go back to Egypt.

As a queer female she was raised in an abusive family. Some of the things she has experienced would destroy someone’s mental health forever: “My mom was so overprotective, controlling, and she treated me like her slave since I was 5 years old… I was forced to wear a hijab when I was 6. I was forced to go to the clinic with my mom to check my virginity when I was 8, 9, and 12 years old and another time when I had my first period.” But Dolly has always been outspoken. This blog she wrote on our platform when she was stil in Egypt.

From the moment she arrived in Georgia, she has tried to get a job and take care of herself. She found a few jobs and after they found out about her sexuality and her activism, she was fired again. She is confident that she will get there, but it can take some time. We can help her, by forming a group of sponsors around Dolly that can support her with a small amount per month. Until she finds a job, or work online, to provide for herself. So if you can spare 5 or 10 EURO/ USD a month, you can give this young woman a chance to start living. Finally.