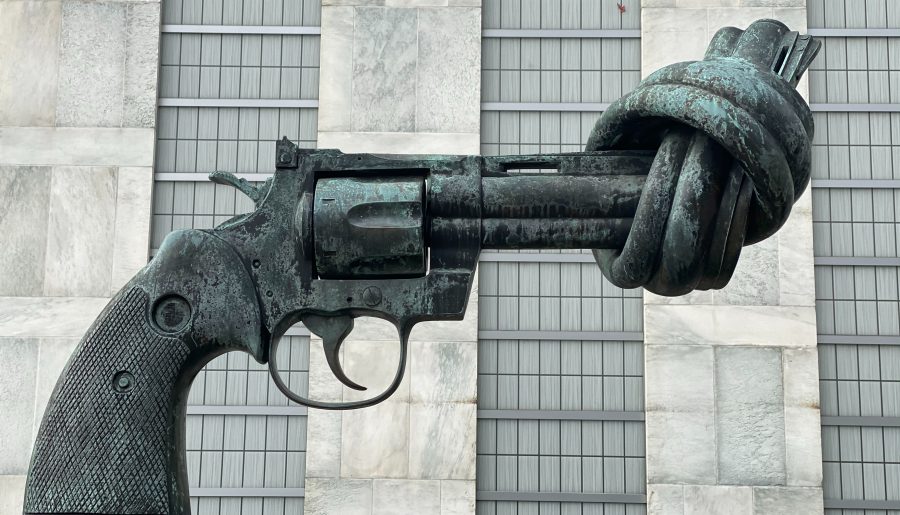 Human evolution has created a primitive instinct in nature to procure any defensive mechanism. This is not just with humans. Plants and other animals alike developed over time a protective means to shield them from danger. When living organisms sense danger, they are either prone to act offensively or camouflage within their environment. Unlike other organisms, human biology, and that of some animals, do not have offensive protection. Hence the desire to wield a weapon. From carving stones into sharp weapons in the bronze age to the manufacturing of nuclear weapons, it has always been in our nature to confide our insecurities in objects capable of providing the protection we need.

However, the thirst for power and other environmental factors has also seen another venture of using these weapons. Day in and day out, we hear news and may have observed the mayhem these weapons can cause. Amongst these weapons, the debate is the right to own a weapon. A school of thought has argued: providing stricter gun laws may restore order. A different school of thought is that stricter gun laws may not keep our homes, streets and schools safe. They argue the pursuit of any anti-gun laws would be an infringement on the rights of individuals and also question the moral status of the state in such a venture. This article seeks to explore the moral arguments of Pro-Gun advocates and various other debates on gun rights and gun laws.
Gun laws.
What is the essence of gun laws? Will they achieve the aims for which they were enacted? Will stricter gun laws save innocent lives? Among these questions, pro-gun advocates argue that gun laws will not only affect the large majority of law-abiding citizens who own guns but will deprive these individuals of their right to self-defense and the rights needed to defend their properties and homes. Gun laws are usually aimed at drug traffickers, armed robbers and criminals. They, hence, risk non-compliance since they would be broken regardless. Most people looking to commit great felonies would avoid the right path in procuring a rifle and pursue any illegal means necessary to avoid being traced to the crime.

Moral Status of the State

Gun laws will also make the state an accomplice of a crime since the laws incapacitate individuals from defending themselves. The following scenarios give a fair idea of how the state would be assisting criminals, in enacting stricter gun laws.

In a scenario where a crime causing great public outrage has occurred, unless someone is punished, there will be riots causing injury to many innocent people. The police can’t find the criminal, but they can frame an innocent person to restore peace. The plausible verdict will be not to frame the innocent person. It is wrong to violate an individual’s rights even to produce greater comparable benefits to others. Another case study is if somehow killing one innocent person will prevent World War 2. The reasonable verdict will be to kill the innocent person. While it may be justified to violate an individual’s rights for the greater good, gun control laws are so wrong even to prevent comparable harm to others. Gun control laws may be justified only if they prevented as much harm as it caused. These laws are bound to fail due to non-compliance with gun laws. Non-compliance stems from the durability of guns and because gun laws are aimed at criminals. Gun law violations are small crimes. People willing to commit felonies are usually willing to commit lesser crimes. There is a greater chance law-abiding citizens will obey and criminals will ignore.

While pro-gun advocates may have a sound argument against stricter laws, the subject of morality as far as human lives are concerned has been a topic of the century. Death penalty and assisted suicide are also other moral subjects we have failed to provide answers for. Humans, however indispensable, have proven to be unpredictable and vulnerable in the face of power and the zeal to fulfill our innermost desires. Perhaps we may be looking at this from the wrong perspective. The weapon industry is more inclined to making weapons deadlier than making them safe to handle. Maybe if we think hard enough and make a little effort in our venture in science and technology, we could provide answers to this conundrum we face today and save ourselves from unending misery.

Photo by Maria Lysenko on Unsplash

Photo by Maria Lysenko on Unsplash