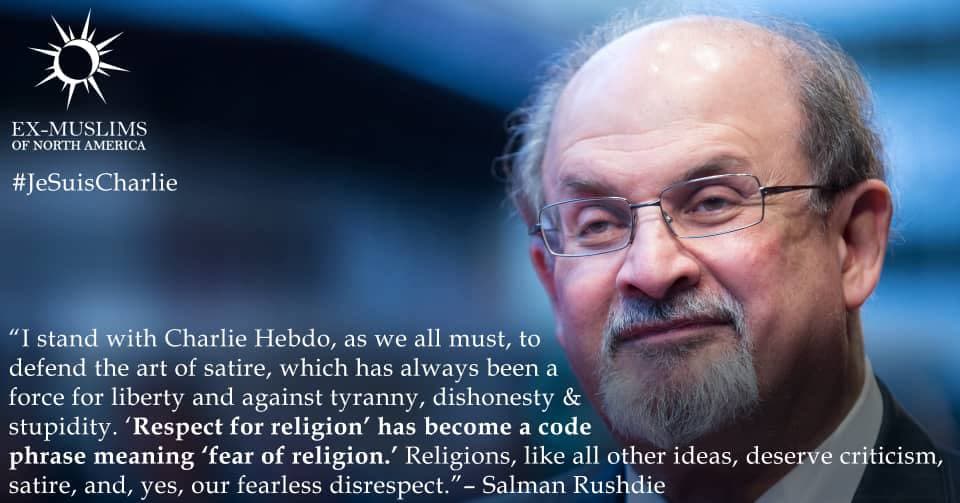 Seven (7) years ago on January 7th, France suffered a terrorist attack in her city Paris. The office of Charlie Hebdo magazine was the epicenter of this attack that led to 12 people losing their lives . Charlie was noted for picturing the holy prophet Mohammed in his magazine. Journalists in that magazine soon after started receiving death threats from Islamic state(ISIS) and later they were attacked.

After that incident the hashtag (#JeSuisCharlie) went viral on social media in support of this magazine and its works, more importantly FREEDOM OF SPEECH. Few days ago this hashtag went viral on Twitter in remembrance of those who died, those who survived and people still working bravely to keep France away from Islamic sharia law. As ex-Muslims, many of us have lived in Muslim countries where there is no respect for human rights, freedom of speech and freedom of religion. Mullahs and Imams have consistently made sure that these rights are not given the due reverence.

Maryam Ghazvie is a survivor of that attack on Charlie Hebdo. She has been working there for years.
Let’s listen to what she has to say on “Islamophobia” and how this word is protecting Islamist fundamentalists:
https://youtu.be/nPsEfQIKgU0.

In Afghanistan under the governance of Taliban, people are being executed for going contrary to their laws.
In Iran, Soheil Arabi has been in prison for the past eight years for expressing an opinion on Islam. Yousef Mehrdad is going to be executed for insulting Islam in Iran. Raif Badawi is still in prison in Saudi Arabia for promoting atheism which is considered terrorism in Kingdom of Saudi.

An Indian ex-Muslim activist is in prison in UAE (United Arab Emirates) due to criticizing Islam. Mubarak Bala has been in prison for more than a year for criticizing Islam in Nigeria. Turan Dursun has been killed in public in Istanbul, Turkey because of being an ex-Muslim and a critic of Islam. Junied Hafiz is still in prison in Pakistan even when he hasn’t criticized Islam.
Taslima Nasreen has been constantly receiving death threats because of being a Bengali ex-Muslim and a feminist.

Apostate prophet whose real name is Ridvan Aydamir has received a legal order to be imprisoned for criticizing Islam.
Arsalan Rezai was stabbed in front of his house in Turkey when he fled Iran as an ex-Muslim activist. Salman Rushdie had received several death threats from Iranian leader Khomeini, other Pakistani mullahs and many other imams for mocking Quran and criticizing Islam. Asie Bibi had to flee Pakistan cause Muslims where asking for her execution while they call her question regarding differences between Muhammad and Jesus as blasphemy. When you live in a place where you have no freedom to express your opinion on Islam, they start calling you “islamophobe” in order to silence you and protect their horrible ideology from criticism. Freedom of speech is the best and the only way to protect ourselves from religious tyranny and it should be protected.

The words by Chief editor of Charlie Hebdo should not be forgotten:” I am not afraid of retaliation, it perhaps sounds a bit pompous…. but I prefer to die standing on my feet than living on my knees”
All stories aren’t covered by news agencies. Abbas Mohammadi has been attacked on Germany for showing Muhammad cartoons and he has been constantly receiving death threats from Islamists. Sharar Konourtabrizi has gotten attacked twice for mocking Islam and promoting acceptance of homosexuality. Maryam Namazie is in real danger from Iranian regime due to not accepting Islamic values, leaving Islam and blaspheming against it and also Armin Navabi who is the founder of Atheist republic. Harris Sultan is being called out in order to be found by Muslims and then murdered.

Samuel Paty, a French teacher, was beheaded by an 18-year old Russian Muslim teenager in front of his school. The student’s action was resulted from the teacher showing cartoons of Charlie Hebdo magazine. The content were related to Muhammad prophet of Islam. (#JeSuisSamuel) is another hashtag in support of this innocent victim of Islamic extremism. Here is a poem in his memorial.

Atheist republic started a set of arts in order to fight blasphemy laws all around the world.
You can get them all here: http://blasphemousart.com