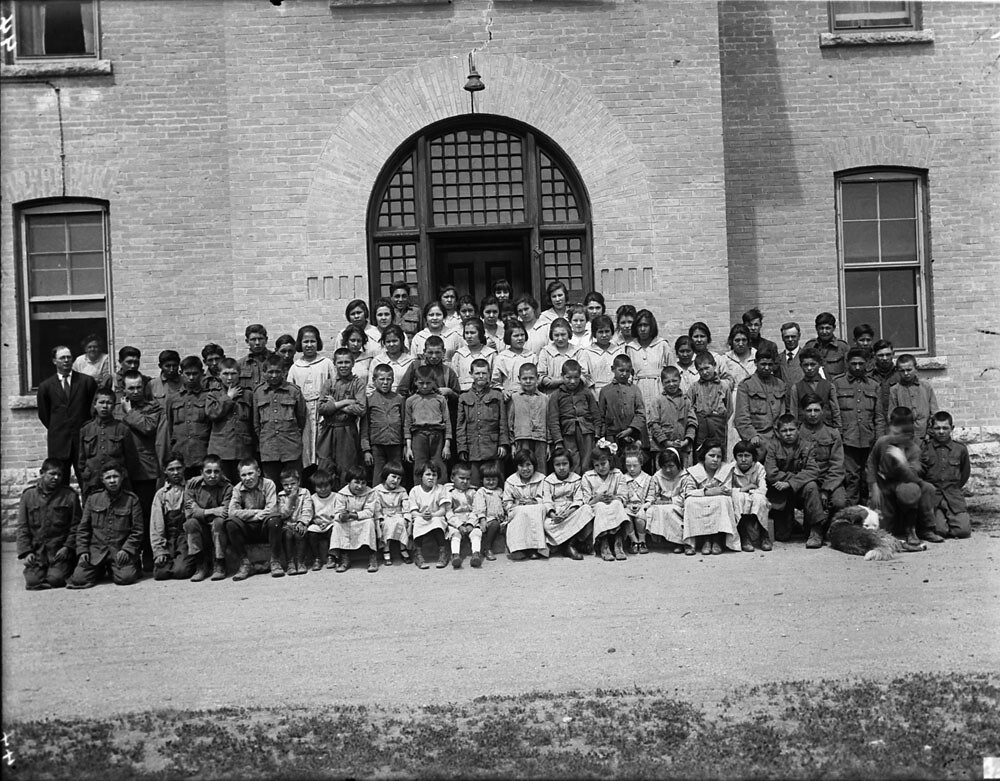 The above image is of children at a residential school in Brandon, Manitoba. The photo belongs to the Library and Archives of Canada  and has a Creative Common license 2.0 attached.

When discussing the victims of residential schools, one tends to imagine indigenous children being ripped from their homes and being made to stay in a dorm on school property. That leaves out a huge number of other children who still experienced a great deal of cultural linguistic destruction just like their on-campus counterparts.

Just a few days ago, on Oct. 5, a federal judge in Vancouver, British Columbia approved a settlement for residential school “day scholars.” These are children who attended residential schools during the day but went home at night. Residential schools were government-sponsored religious schools, often run by the Catholic, Methodist, Anglican and Presbytarian churches, whose purpose was to assimilate Indigenous people into a white, Christian cultural order. Some call this genocide.

The American version was called American Indian Boarding Schools, and the motto of the Founder of the Carlisle Indian School in Pennsylvania sums up their purpose: “Kill the Indian, Save the Man.” The first Canadian school, called the Mohawk Institute, went up in Brantford, Ontario in 1831. They began admitting girls into the school three years later. After the passing of several laws and policies after the creation of Canada in 1867, more and more schools popped up across the country. Roughly 139 schools across the country have been recognized and it is estimated that 150,000 children were forced to go. The last school was closed in the 90s. Yet public attention didn’t come toward these schools until roughly the 60s.

Chanie Wenjack, a 12-year-old Ojibwe boy, froze to death trying to escape his residential school in 1966, causing a national uproar. Several investigations and inquiries discovered widespread instances of physical, mental and sexual abuse. Children were beaten for something as simple as speaking their language.

Canada, last spring, was horrified to find the graves of 215 indigenous children at a school in Kamloops, British Columbia. Thousands more have been found at other ones. A grim tradition of leaving children’s shoes at government buildings and statues of perpetrators of the crime now takes place. A statue of Egerton Ryerson, who is the creator of Canada’s public education system and one of the architects of the residential schools, was toppled last summer. His statue was beheaded and the body was thrown in Lake Ontario. The head was taken to Caledonia, Ontario where it was put on a pike. There is an ongoing battle between developers and the indigenous of the area in Caledonia. A statue of Canada’s first prime minister, Sir John A. Macdonald was also toppled in Montreal with others vandalized. Catholic churches were also burned.

In 2007, a class action lawsuit launched by the survivors of the schools was settled. Along with a $1.9 billion Common Experience Payment package, the settlement promised to create an Independent Assessment Process for sexual and physical abuse survivors, healing through health programs, commemorative activities and a Truth and Reconciliation Commision.

Here is the Truth and Reconciliation Commission’s 94 calls to action. Left out of that 2007 settlement were the day scholars. A separate lawsuit from the 2007 one was launched by chiefs Garry Feschuk and Shane Gottfriedson. As part of the settlements, the Canadian federal government has pledged $50 million into a DayScholars Revitalization Fund.

Each of the survivors, or their estates if the attendee is not alive, will receive $10,000.