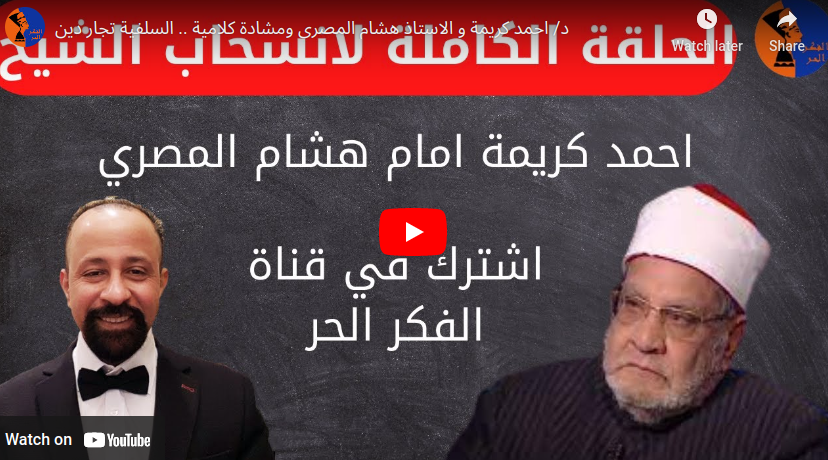 Hesham Fouad Ahmed (Hesham El Masry), is an Egyptian Atheist blogger. After a religious discourse with a Sheikh from Al-Azhar (Ahmed Karima) on YouTube, Ahmed Karima cursed Hesham and then withdrew from the discussion.

Then the Sheikh took advantage of his connections to press the national security to apprehend Hesham and the owner of the channel. On Sunday, November 6, 2022, the Sheikh came live on a channel and incited against Hesham again and called on lawyers to press charges to the Public Prosecutor against the channel and its guests on charges of disrespecting Islam and blocking the channel in Egypt.

On the same day Hesham came out on a live video on Youtube in which he talked about the threats directed at him and that he will stop for a period of time until the ongoing threat has passed. And in the event of his disappearance, The YouTube channel manager will publicly disclose the threat he is facing.

On Monday, November 7, 2022, the channel manager announced that he had lost contact with Hesham El-Masry and that Hesham was apprehended by the National Security.
Hesham is facing an accusation of disrespecting Islam, a charge that is usually hurled against freethinkers, and the penalty in prison ranges from 6 months to 5 years.

It is worth mentioning that in the middle of October last month, the poet Amina Abdullah was apprehended and faced the same accusation, “Disrespecting Islam”. Later she got released on bail and still awaiting trial. There are many journalists, writers, and intellectuals who have faced the same accusation (Disrespecting Religions) even though many of them are Muslims who have never claimed to have left religion. There are many who are considered reformers and thinkers, such as Islam al-Buhairi, Ibrahim Issa, and finally Ahmed Abdo Maher.
And the question here is, is that the fate of the person with a different view to be prosecuted and held accountable for their conscience and intellectual opinions?